Well, the holiday season is upon us and here we go again. I must admit that 2014 was one hell of a year for everybody on Planet Earth. We got mass extinctions of animals and humans, executions of guilty and innocent, carnage, disease, plummeting gas prices along with Pres. Obama’s approval ratings, terrorists so nondescript that they weren’t sure what to call them, more wars and occupation that you can shake a stick at, scandals of the seedy kind, and various weather anomalies that boggle the mind. It has been a war of truth and lies and truth and more lies and confusion to boot with the common phrase being, “I don’t know what to believe anymore.”

The so-called alternative media has stuck its fingers into the corporate pie and are now mouthing so much disinfo you have to take out your ouji board to determine who is moving things around. We have had so many false flag announcements about the coming apocalypse it makes your head spin, as the checkerboard trails cross the skies, the denials of Mon”santan”o, the cover-ups on Mars, the loose change falling of Tower 7 and 3d Holograms you can cuddle with. I mean, we have practically seen it all except the missing MH370.

We have had a herd of celebs take their last breaths and mourn the lost of a woman who openly proclaim Michelle Obama as a tranny! There is so much more that I could list here but it would detract from my original reason for this post.

I guess I have a bone to pick with the so-called NEW AGERS! I don’t understand  how they can continue to persist in the most commercialized cycle of insanity that hits this planet every year moving into the so-called New Year. Now, I am not pointing a finger at ALL of them, so let me just say MOST OF THEM!

All year round we get the love and light spew. We get the “we are awakening” or the “awakening is upon us” or the “Guardian Forces” and the “Ashtar Command” are helping us, or even we are “moving into the 4-5th dimensions.” How do we do all that and still celebrate Christmas?

I have subscribed to various “Love and Light” blogs and websites. I have also subscribed to various UFO stuff on the internet. So I thought the above picture was quite apropos for my rant today. Seriously, as Mr. Claus is traversing through the inner and outer planes surely, even he knows the TRUTH ABOUT CHRISTMAS. He has to be multi-dimensional to be in all those places around the world at one time, wouldn’t you think? How come ain’t nobody channeling Santa Claus?? He is real, right?

But I digress. My real rant is how unnerving it is to receive “Season’s Greetings”, “Merry Christmas” etc., etc., etc. from these so-called “New Agers”. Don’t they know that it’s all a hoax, at best and quite fabricated? If they are contacting “Ancient Aliens” and/or “Mary” haven’t they been told that this is a bunch of boulderdash to just grab people’s money?

Well, I am seriously questioning these folks now. It was bad enough that they had folks running helter-skelter over 2012. But here we are 2 years later and they have not deterred in their participation in this horrendous disinformation campaign called Christmas. As spiritual beings, they should know the truth and as beings of integrity, they should live by it. Otherwise, these 50 million channelers are just in it for the money. What other reason could there be? They have to be politically correct and keep in touch with their constituency. That is, if they step too far away from the status quo, they may lose their bread and butter, fine cars and nice houses and expensive seminars that they invite folks to come to to ASCEND.

THIS ASCENSION THING MUST BE A CROCK OF BS!

If people are truly ascending, channeling and talking to ET’s how can they participate in this massive disinfo campaign and call themselves true leaders of the movement? I am beginning to seriously question the authenticity of the so-called ASCENSION movement when I see ASCENDED MASTERS, not pulling the coat tail of their followers and telling them to stay away from the tripe. Or, do these so-called ASCENDED MASTERS have a hidden agenda? It just makes you wonder. Where are they during the times when we are sold a huge hypnotic bill of goods, that keeps us treading for another year and/or lifetime, trying to keep our heads above water on a Prison Planet such as this one. If these folks are willing to defy all logic and participate in this scheme of disenfranchisement, then it certainly makes anything they say after the said, ‘New Year’ holiday, dubious and base.

These people, have played on the heart strings of the masses for decades if not longer than that. I assume the so-called NEW AGE movement has been going on for more than 50 years from checking out the print date on many of these materials. These folks have been giving information about the Sun, the moon, the stars, the galaxies, the other worlds, the other worldlies, the inner earth, magnetosphere, the comets, asteroids and errantly massive dustballs and light/space ships, orbs, etc. and they have not come to the conclusion that Christmas is disinfo. How is that possible?

Believe me, I am inclined to believe all of the above but most inclined to believe the last one. If these folks are truly contacting these entities and they are not adjusting their lifestyles accordingly then something is really and truly wrong with the so-called NEW AGE movement.

Modern Technology, A Blessing or Curse for the Youth of This Modern Age

Children today are rather keen and determined about their media gadgets. Two weeks ago, I introduced my Anisa Joseph – Amma Tacheampong﻿ to Gummy Bear. Now her older brother, Kwesi, who is now 10 years old introduced me to Gummy Bear. This was several years ago, maybe he was about 4 or 5 years old. At that time he was confined to the computer. He did not have his own cell phone and sat for hours watching Gummy bear playlist I made for him on YouTube. Now, forward to 5-6 years later and cell phones have become small computers that can connect through wifi to the internet, whether it makes calls or not. So, instead of throwing your cell phone away, it can become an alternate computer. But who guessed it would create such a ruckus with the little ones who not only know how to watch it, but know how to manipulate the touch screen, navigate to the movies they want on Netflix, or YouTube and stare at that tiny screen for hours upon hours. 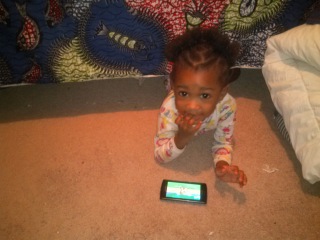 This is exactly what my granddaughter does. She has our discarded cell phones and uses them to surf the net for movies she wishes to watch. And I wouldn’t be honest if I didn’t mention that she will throw a tantrum if you don’t give her a phone. She does understand that the phone dies when the charge is all gone, she also has come to understand that she can only use her phone, not anyone else’s. That was a tough one, cause we had to learn that too. If you put it in her hands just to show her something, she will NOT LET YOU TAKE IT BACK!

I don’t get a chance to post all the movies and pics and stories I have of her, but I had to stop whatever I was doing and post this one. SMDH…….. LIttle people know their way around this technology better than most people over 40. They are growing up with this technology and leaving the old stuff behind.

Anisa doesn’t know how to use a standard mouse, but she certainly knows how to use her little finger on a touch screen to navigate her way around the internet. I don’t know, part of me is really really worried about this, and another part of me is amazed at how smart she is. She will be having her 3rd birthday June 11, 2014.

SHE FOUND THIS VIDEO!!!!!!!
Anisa and her gadgets. She is proficient at using the Kindle and her Cell phone to navigate the Netflix videos and Youtube videos. She knows how to click on the app that she wants to work with. From the photo gallery; to watching videos of herself, to playing music, especially the silly ringtones; to Netflix account that has videos for her, and she knows how to go to Youtube and click on videos she would like to watch.
She does this for hours until the charge goes on the kindle or phone. Fortunately she has been watching appropriate videos. And BTW, she loves Dora!!!
Anyway, I am not sure if she is going to be quite vain or not. All I know is that I was in my 40’s before I saw a video of myself and it was weird watching myself. She watches videos of herself from age 5 months to now, she will be 3 years old, June 11, 2014

The jury is still out on this one for me. Mainly because of how much time I spend on my computer and interacting with social media. My granddaughter is 3 years old, she has been using cell phone since she was a little younger than 2years of age, maybe younger.
I am amazed at her abilities. Everyone around her has a gadget. Her older brother would use the Kindle and she would mimic his way of using it. He didn’t really have to show her, she would watch him. He would find games and movies on the Kindle and she did it too.
She will be 3 years old come June 11. She is still intrigued by nature and her surroundings, and will play in the yard for hours, but her older brother, well, he would rather play with his gadgets. We shall see if the gadgets will totally consume her as she gets older.