Archive for the ‘Adam’ Category

Saturn, Satan & God And The Nature of Reality Part 1&2 (Video)

NB Commentary:
This is a really, really long video. When I do domestic stuff I listen/watch. Anyone watching this may have to do it in sections and Merkabah has broken this video up into parts. I prefer the whole video personally. After watching it, I posted my comments under the video, I am still waiting to hear from Merkabah which is cool, I am sure he is quite busy, it takes forever to make these videos. See below my questions.
Feel free to join the discussion.

MY QUESTIONS AND CURIOSITIES

I watch/listen to many of your videos. sometimes I go thru them more than once. I watch them and listen to them because you are covering a lot of material that I have been exposed to as well, and you also tend to drop a few new tidbits that I have not heard of and that is always exciting. But I have a few questions, I won’t ask them all now, but….. When looking at the book of Genesis, there were some things that I have always found interesting and like you say, grown adults accept without question. I always questioned the stuff I heard.

I went to Catholic school so you know I was the bane of my teachers existence, all of whom were nuns, because lay people were not ALLOWED to teach religion classes, but I digress. I really hope to get your feedback

1. If Eve was made from Adam’s rib.. doesn’t that either make Eve his daughter or sister since they share the same DNA? If I remember correctly, bone marrow is keen in stem cell research and that of DNA as well, correct me if I’m wrong on that, I ain’t no chemist. However way you slice it, wouldn’t they be “closely” related??

2. If Cane married his sister??? He knew her….. um, doesn’t that sound incestuous as well.

3. If “God” created man and woman and told them to multiply and replenish the earth.. was it one man and one woman? a bunch of men and women? were they all sprung from the same seed? It really gets confusing.. but it all sounds incestuous.

4. If “God” destroyed the earth and only left Noah and his family, and they in turn replenished the earth,,, isn’t that incestuous as well?? I’m just saying… there was a whole lot of incest going on, no matter how you slice it in the book of Genesis. Anyone who replicates this story is also replicating the notion of incest.

5. My final question on this video is this! Where did the first human beings come from? Who or what is this God that created them. And if this God said, “let us” who is the “us” Was it God (male) and his female consort?? 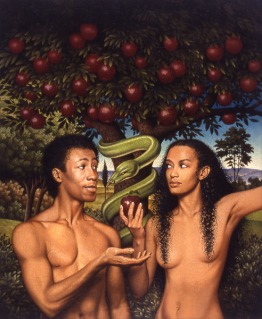 Please understand that I do not want the traditional Christian Answers for these questions. I want your answers from your research as you remind us often that you do that. What have you found?
PS, and one more thing, have you noticed that depictions of Adam and Eve always show belly buttons? Do you find that curious? Wouldn’t belly buttons mean they spent some time in somebody’s womb?? Why would God create them with belly buttons they never used??
Okay, I’m done Merkabah, thanks for reading this!!﻿