Archive for the ‘determination’ Category

It seems that the militarization and military dominance of the Western World Powers are in full swing. Of course they experiment first on the least able to resist their control and then move towards the higher stakes.

There are many fields of conquest taking place at this moment, a sign that the steady plan by plan operations do not work reminiscent of how at the end of the battle all the ammo that is left is hoisted upon  the enemy. Western powers are losing their dominion over the world, economically, politically and spiritually. There desire for a New World Order by culling the masses has become exposed for all to see. As a result, they have found the need to resort to even more treacherous strategies. Ebola is bio-chemical warfare, hence the need for boots on the ground. They care not who they endanger as those wearing the boots are just as expendable as those who are affected by this virus.

The design of worldwide population reduction is in full swing and they are now testing one of the deadliest man-made virus in recent history. When the initial outbreak occurred the loss of life was not astronomical. Now they have gotten to a people on the African continent who were already broken and now even more so, hence their inability to fight the infection. The human’s immune system can be render useless with varying conditions of stress, strife, struggle, heart break, wars and various other events that happen in the life of human beings on this planet.
From my point of view, it is quite clear that the propaganda campaign that has been launched against the virus and the African people is a clear indicator that this disease has been set loose on the African populations. We must also look at the natural resources in the areas hit hardest by the outbreak and connect the dots.
Western Powers are plummeting into the depths of despair. Economically, politically and spiritually they are losing control over the masses as seen by the many protests against their governments. Their economies are collapsing as we speak and once the great Euro-American Empires collapse all those entrenched in their way of life will collapse as well. It will go down in the annals of time as the True and Unequivocal fall of man.
Africans who have lusted after the Western Way of Life, have forsaken their ancient values for Capitalism. Once a beacon in the world for Community and support for family and traditional institutions; Africa’s Leaders have become Westernized in their climb to the so-called top of the ladder. They are finding out slowly but surely that the Euro-Americans and their schemes for advancement cannot be trusted.

While the “Obama Trojan” horse was set loose on 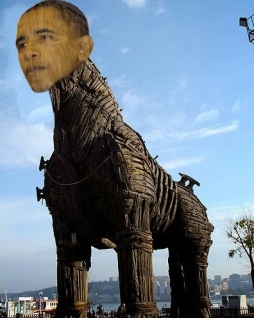 unknowing masses of Blacks in Africa, the Black leaders are lining their pockets with promises of riches, Western riches…. Ignoring their own profitability in their home grown resources as well as ingenuity. Euro-American Powers want to trump the advancement of China into Africa. This is a war on many fronts and all not done with weapons of mass destruction as they have been deployed in the past.

It is an insidious, creeping into the very fiber of the African being, a scraping away of all ethical and community connections; a masking of a great cancer that has rendered Africans in their quest for acknowledgement and acceptance by the beast who colonized it in the first place.
We are definitely living in some seriously trying times as wars wage across the planet. Our host Mother Earth has seen nothing like this before in her history, as we are much more populated and given to warring with each other than ever before.
Is there any hope? I am not too sure of that. In my opinion, attempting to gather together a Union of African countries numbering 50+ (as some countries have seceded and formed additional countries on the continent) the division among African people as a whole is daunting. Where are the true African leaders who will  or can bridge the gap? Qaddafi is gone along with so many others. Where are the true leaders of the African people who have the vision to see that their dependence on Euro-American assistance is a death knell?
I believe that Africans swallowed the Euro-American belief systems, religious, economic and political. These systems are antithesis to what ancient traditional Africa stood for. It flies in the face of the Ancient Ancestral traditions. It is a divide and conquer mechanism that has destroyed the very “immune” system of the Continental African. Ebola is just a sign of a deeper and more shattering phenomenon. Africa is infected with Western ideology, and as a result, Africa will fall ill with its disease and suffer a great loss until the cure is discovered. What is the cure?

Deporting any and all Euro-American ideology in all its forms. Taking back its true nature from the vulture who consumed it.

Until then, Africa will drown in the sinking ship of Western Imperialism. 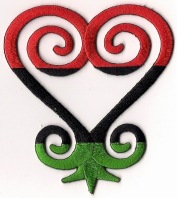 A lesson in love, cooperation, fear, trust, ingenuity, inventiveness, resolve and determination. What you may ask?? I just watched my next door neighbors’ three young children come home from school and discover they are locked out of the house. (Now how come not one of them had a key, is another story, lol) They appear to be 12 (girl), 10 (boy) and about 6(boy) years of age.
Watching the elder brother take the lead and open the basement window to climb in, only to find out, that while he may have been the one to open the window, he was not small enough to get through it. He must have attempted doing it several times, from going head first to feet first.

The others coached, laughed and watched his every attempt to get through the window but he simply could not figure out how to get his backsides through it.
Then sister takes the lead, she seems completely animated the entire time, giving instructions, fussing, and basically being a female in a stressful situation where she has to get the men to follow her idea. Her idea, “let little man go through,” he can fit.
Finally, big brother, after several failed attempts, IN A HUFF, goes along with the idea, snatches little man’s glasses off and tells him to do it. Little man is clearly terrified of the idea. What if I fall? What if I break something? Who is gonna catch me??
Big brother says, never mind and attempts to do it again with no luck. It is a tight squeeze and his hindparts just won’t make it, no matter how much he twists and turns. Then big sister stands behind big brother and measures her own hindparts. Hmmmmm. Maybe a bit smaller. She tries, it quite a few times, and while it may be a bit smaller??? she is not the same shape as her brother, long torso, just can’t seem to maneuver that torso through that tiny window opening. All the while they take turns running around to the other side of the building. Must be a bigger window around there to climb through.
Again and again, they negotiate and strategize and maneuver and attempt to figure out how can they get into the house.
Finally at long last, little man gets up the courage. It seemed to never occur to them to hold him as he goes through the tiny window opening. Something so obvious did not appear obvious to them at all.
Little man, took off his glasses for the 4th time, tried going in head first, then feet first. It seemed his nervousness was dissipating as he pushed himself in little by little. After watching this for a few seconds, big brother has a great idea, maybe I’ll help him! He rushes over and holds little man by the head!! Wow, I wondered to my self, why didn’t they just hold his hands and reassure him that he wouldn’t get hurt??
In an instant, little man is in the house. He runs to the front door in another instant and opens the door. He lets his big brother and sister in to cheers and yells, little man, is the hero of the day!!!!
I remember as a child and even an adult being locked out of the house. I remember pushing my own tiny son through the opening of a window. I remember my children telling me how they climbed onto the roof and got themselves in. But this is the absolute first time I saw little people do it on their own. I basically would have been of no service to them, they don’t know me, I am new to the neighborhood and most certainly they were taught not to speak to strangers.

It was an absolute pleasure to watch them work it out, and then wonder, how come we big bad adults can’t do the same? What is wrong with us that, if we have a common goal, we cannot negotiate in a way that everyone is helped and no one is hurt. Why can’t we take the risk of trying something new, it may be a little scary, but if the new plan works, try it.
Then I thought to myself, I hope and pray they grow up to be the same kind of adults I saw them as children. And then I hope they grow up and work in a important position at the UN, and maybe they could bring some of their talents and help this world be a better place, because seriously, ADULTS ARE NOT MAKING IT HAPPEN!
Update: The next day the young people arrive home again, to a locked door. Little man goes straight for the window. But alas, there was no need, they had the key to get in!