Archive for the ‘Venus’ Category

It’s been over a year since I saw Venus Noire (Black Venus) at the New York Film Festival in the fall of 2010, and it never received a stateside release; actually I’m not sure it got much of a release outside of the international film festival circuit and a few European territories.
So I’m betting most of you have never seen French/Tunisian filmmaker Abdel Kechiche’s problematic though worth-watching Saartjie “Sarah” Baartman, otherwise derogatorily known as the Hottentot Venus film, which starred newcomer Yahima Torres in the title role.
The subject matter certain isn’t one that will attract audiences to the theater en masse; and the fact that the film is almost 3 hours long, with subtitles, likely didn’t exactly make potentially interested American distributors salivate at the film’s box office potential.
But if you’re in Los Angeles during the month of February, and you’re at all interested in seeing the film, here’s your shot! It’s either now, or you wait for a stateside home video release (though it’s on DVD in parts of Europe and Canada; just not in the USA).
But I’d recommend a theatrical viewing. 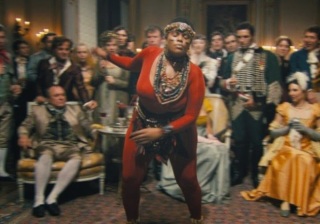