Archive for the ‘bombers’ Category

US Media Shows Footage of Russian Airstrikes Passed Off as American

US Media Shows Footage of Russian Airstrikes Passed Off as American
Nana’s Commentary:
It appears that everyone is rejoicing in Russia’s efforts to cause the downfall of “ISIS” which is ironically being call DAESH for some reason and it’s notable that the “ISIS” people hate that name and would rather be called “IS” but that is not really the crux of this commentary.

US Media Shows Footage of Russian Airstrikes Passed Off as American
© Ministry of defence of the Russian Federation
US
21:18 21.11.2015(updated 03:54 22.11.2015) Get short URL
Topic:
PBS NewsHour, a daily US television news program shown on the US Public Broadcasting Service (PBS), used footage of Russian airstrikes against ISIL targets, claiming that they were US airstrikes, an Information Clearing House article revealed.
Earlier this week, the US government said it would intensify anti-ISIL airstrikes and bomb the terrorist organization’s oil infrastructure, which is ISIL’s primary source of income.
After that, on November 16, the US military said it destroyed 116 trucks carrying illegal oil in ISIL-controlled territories.
Russian Strategic Bombers Launch 12 Cruise Missiles on ISIL Targets in Syria (VIDEO)
“On Monday, 295 trucks were in the area, and more than a third of them were destroyed, United States officials said. The A-10s dropped two dozen 500-pound bombs and conducted strafing runs with 30-millimeter Gatling guns. The AC-130s attacked with 30-millimeter Gatling guns and 105-millimeter cannons,” the New York Times colorfully described the US military operation that allegedly took place on November 16.
Well, it sure sounded like a major anti-ISIL operation in the wake of the Paris attacks. But so far, these are just claims, not backed by any evidence.
Two days later, on November 18, the Russian Air Force destroyed 500 oil trucks that had been illegally transporting oil from ISIS-controlled territories.
Unlike the US Air Force, which didn’t provide any video evidence from their alleged operation, the Russian Defense Ministry promptly released videos of what exactly happened to terrorists and how the operation unfolded.
On November 19, PBS NewsHour ran a program on ISIL and “showed” how their oil trucks were destroyed by US airstrikes.
It’s all fine and dandy, but the US public broadcaster used the footage of Russian airstrikes, passing them off as US airstrikes, without revealing the true source.
“For the first time the US is attacking oil delivery trucks,” the voice-over said between 2:30 — 2:35, while showing a clip of exactly the same video published by the Russian Defense Ministry the day before.
The PBS shows footage of Russian airstrikes against ISIL targets, passing them off as US airstrikes. The PBS program neither mentioned the Russian military operation nor revealed the source of the footage.
What the US channel did was just outright lying, because millions of viewers would certainly think the video footage showing the explosions of oil trucks was from US airstrikes about which the New York Times ran an article on Monday.
Read more: http://sputniknews.com/us/20151121/1030518092/pbs-newshour-russian-airstrikes-footage-us-lying.html#ixzz3sGznh5lB

Around 500 fuel tanker vehicles transporting illegal oil from Syria to Iraq for processing have been destroyed by Russia’s Air Forces, the General Staff said. “In recent years, Islamic State (IS, formerly ISIS/ISIL) and other extremist groups have organized the operations of the so-called ‘pipeline on wheels’ on the territories they control,” Russian General Staff spokesman Colonel General Andrey Kartapolov said.

Hundreds of thousands of tons of fuel have been delivered to Iraq for processing by trucks and the revenue generated from these illegal exports is the one of the terrorists’ main sources of funding, he said. The spokesman displayed images showing convoys comprised of hundreds of vehicles transporting oil to back up his assertion. 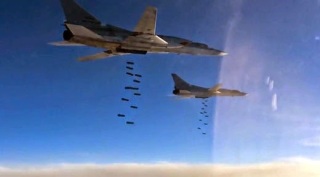 “In just the first few days, our aviation has destroyed 500 fuel tanker trucks, which greatly reduced illegal oil export capabilities of the militants and, accordingly, their income from oil smuggling,” Kartapolov stressed. The spokesman also said that the Russian military has begun developing proposals for joint military action with the French Navy against the terrorists in accordance with an order by President Vladimir Putin. “This joint work will begin after the arrival of aircraft carrier Charles de Gaulle to the Syrian shores,” Kartapolov explained.

How does ISIS earn $3 million a day? NATO helps them smuggle oil

The terrorist network Islamic State (ISIL) is financed through illegal oil sales and makes a profit of about three million dollars a day. NATO members, including Turkey, the US and the United Kingdom tolerate the terrorists’ oil smuggling activities, DWN reported. Close allies of the United States and the UK secretly finance the terrorist group Islamic State (ISIL). The Kurdistan Regional Government in northern Iraq and the Turkish military intelligence have supported ISIL’s oil smuggling activities and supplied the terrorist group with weapons and equipment, DWN reported. Oil smuggling is one of the main financial resources for ISIL. The terrorist group controls about 60 percent of Syria’s oil production and seven major oil fields in Iraq. ISIL managed to increase its production to 45,000 barrels of oil per day, supported by a network of corrupt officials in the Kurdish government and Turkey. With their help, the terrorist organization makes an average profit of about 3 million dollars a day, the newspaper wrote. However, both the Turkish and the Kurdish government officially deny any connection to ISIL’s oil smuggling activities.Both governments are said to have taken corresponding measures to stop oil smuggling, supported by the US and British governments. However, widespread corruption in political circles practically brought these efforts to a naught, investigative journalist Nafeez Ahmed reported to MiddleEastEye. Ahmed refers to statements of Turkish, Kurdish and Iraqi officials. An anonymous source in the ruling party of Iraq, the Islamic Dawa party, confirmed to him that “members of the Kurdistan Regional Government have tolerated ISIL’s oil sales on the black market.” According to the official, Turkey tolerates ISIL’s oil black market as well, with the US silently watching these activities. “The Americans know what’s going on. But Erdogan and Obama have a good relationship with each other. Erdogan makes basically what he wants and the United States has to agree with it,” the official said. Even British corporations are reported to be involved in the business of the Islamists. The Anglo-Turkish oil company Genel Energy closely linked to a group of British parliamentarians has reportedly received an order to supply the refineries for the Kurdish energy company Group Nokan. The latter is suspected of supporting ISIL’s illegal oil sales to Turkey, DWN reported.