Archive for the ‘Caribbean’ Category

NB Commentary: Sometimes it is hard for me to wrap my head around the dichotomy that the US calls foreign policy. On one hand they support “freedom fighters” who want to dispose of an evil dictator, on the other hand they prop up evil dictators and guarantee them long life and protection.
In the case of immigration they want to take in Syrians, whom they have no idea what type of social ills they may bring to this country or how many of them may be disgruntled refugees ready to be radicalized, and yet, not far away to the south of the US are poor and starving people, not terrorist but folks who are suffering unfathomable obscenity due to their position on top of tremendous, gas, oil and various other mineral reserves. I am so struck by this and often find myself in a quandary to make sense of it.
Then like clockwork, the little voice inside my head reminds me of what the geopolitical priority of the US & NATO are really based on. And while these “facts” may give way to lesser confusion, it still boggles my mind.

No Mention Here In the USA Of Haitians Forced to Flee Dominican Republic for Haiti, Migrants Land in Limbo Because they are not Latino Or Syrian

Along this arid strip of borderland, the river brings life. Its languid waters are used to cook the food, quench the thirst and bathe the bodies of thousands of Haitian migrants who have poured onto its banks from the Dominican Republic, fleeing threats of violence and deportation.
These days, the river also brings death. Horrid sanitation has led to a cholera outbreak in the camps, infecting and killing people who spilled over the border in recent months in hopes of finding refuge here.
Nearly 3,000 people have arrived in the makeshift camps since the spring, leaving the Dominican Republic by force or by fear after its government began a crackdown on illegal migrants. Some, born in the Dominican Republic but unable to prove it, cannot even speak French or Creole, Haiti’s main languages, showing how wide a net the Dominican government has cast.

Haitian officials have done almost nothing to support them. The population is scattered across the drought-racked southwest border, mostly barren plains. Families of eight sleep in tents fashioned from sticks and cardboard. They drink river water, struggle to find food, and make do without toilets or medical attention. 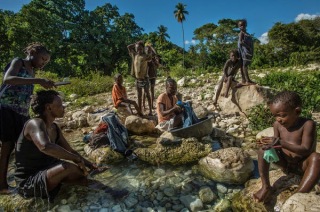 Families wash clothes in the river that runs by Tête à l’Eau, Haiti, where many who fled the Dominican Republic have settled. CreditMeridith Kohut for The New York Times
Now stateless, the refugees exist in the literal and figurative space between two nations that, along with their island, share a history steeped in hostility. Some of the camps were created decades ago, during another iteration of their troubled pasts, but had long since been abandoned. Now, in a new cycle of tension between the nations, they are packed to capacity once again.
The plight along the border is reminiscent, on a smaller scale, of the devastating 2010 earthquake, which claimed the lives of 100,000 to 316,000 Haitians and summoned a wave of billions of dollars in aid. Even today, more than 60,000 displaced people still reside in tent cities around the country.
Only this time, the upheaval is man-made, the result of the policies of the Dominican Republic and the seeming indifference of the Haitian government. The authorities in Haiti do not even formally recognize that the camps exist.
“I haven’t felt normal since my son died,” said David Toussaint, 55, whose 9-year-old boy was one of at least 10 people in the camps to die of cholera. Officials say more than 100 people have been infected.
He lifted himself from a bed his family built in their tent, covered with a frayed tarp. He spends his days there, immobilized by grief. An acrid smell filled the hot air as dust swirled into the tent, cloaking everything.
“This is no way to live,” he said.
When the Dominican government announced that all migrants in the country illegally had to register this June, mass deportations were feared. Those later rounded up were taken largely from remote areas, and bused quietly to border crossings. In total, more than 10,000 people were expelled officially, with nearly another 10,000 people claiming to have been kicked out as well, according to the International Organization for Migration.
But in this climate of fear, an even bigger phenomenon emerged: Tens of thousands of people of Haitian descent decided to leave the Dominican Republic on their own, rather than risk deportation, including some who were born on Dominican soil and knew nothing of Haiti.
Read More: http://www.caribbeanfevercommunity.com/profiles/blogs/forced-to-flee-dominican-republic-for-haiti-migrants-land-in

Why Is Haiti So Poor
Published on Mar 5, 2013
Hugo Chavez shares thoughts of why Haiti is poor. The following is a transcript of the speech given prior to Hugo Chavez’s death on March 05, 2013. Hugo Rafael Chávez Frías born on July 28, 1954 – passed away on March 5, 2013)
https://www.youtube.com/watch?v=mos6SY1XtLM
Vive Haiti!
Haiti, the Black Jacobins, that of Toussaint Louverture.
Haiti that of Pétion.
Haiti, from where Miranda arrived with our flag, it, and a dream of several years, and a project: the South American revolution.
Haiti, that of Bolivar.
Haiti, that of the expeditions of Los Cayos, sister Haiti, Haiti, painful reality.
Fidel Castro, as always, continues to launch his thoughts, his ideas, his contributions to the world in which we live. And this afternoon I received – this morning, rather – the reflections of Fidel, his most recent.
Fidel said, permit me to read some of these deep thoughts of our companion, comrade, commander.
I read: “The tragedy excites, in good faith, a lot of people, specially because of its natural character. But very few of them stop and ask the question: why Haiti is a poor country?
Why does the population depend almost 50% on orders sent from the outside by its families.
Why not also analyze the realities that led to the current situation of Haiti and its enormous suffering? “
I would add that this painful moment seems opportune to reflect and get to the bottom of things: why haiti is so poor?
Why is there so much misery in Haiti?
I continue reading Fidel:
“The most curious in this story is that nobody said a word to remember that Haiti was the first country in which enslaved Africans 400,000 of them, trafficked by Europeans, rose against white owners 30,000 plantation sugar cane and coffee, fulfilling the first great social revolution of our hemisphere. Pages of unsurpassable glory could be written around the earth.
The most eminent general was defeated, Napoleon, out there. Haiti is the net product colonialism. Haiti is the net product of colonialism and imperialism, of more than a century of use of its human resources in the hardest work, of military interventions and the extraction of its wealth.
This historical oblivion is not so serious to the reality which is that Haiti is the shame for our time, in a world where those prevail on the exploitation and plundering of the vast majority of the inhabitants of the planet. “
And then continues in Fidel and his reflections by launching rays of light that lives for this moment humanity. But it is by here we start:
“Haiti is a net product of colonialism. Haiti is a product of imperialism. As not only will complete colonialism, as not only will complete imperialism, and I go further: as not only will complete capitalism, we have situations and people living the painful situation facing Haiti.”
I confess my personal experience, when several years, for the first time, we visited Haiti. I confess, I wanted to cry myself. With one of my companions, I went to see these people in the street, with elation, hope, magic and misery, and I remembered a phrase that came out of the soul, I told my companion nearest the descent of a van – we wanted to walk for a while and we ended up running into a street – I told him: look, mate, the gates of hell, inhabited by black angels.
Because it is a people full of it: this is an angelic people.
I ratify what President Sylia has decreed: while our commitment to our people, all the people, the Venezuelan people are with Haiti, the Bolivarian revolution is with the people of Haiti, with its pain, with its tragedy, with its hope.
— in Caracas, Distrito Federal.

INTERNATIONAL COMMENTARY
Border Tensions Are on the Rise Between Haiti and the Dominican Republic
James M. Roberts / October 02, 2015 /
Excerpt: “This summer, officials in the Dominican Republic (DR) began deporting Haitian migrants and Dominican-born but undocumented people of Haitian descent.That decision has received wide attention, and the DR government of Danilo Medina has been criticized by human rights activists.
For some Haitians, the deportation order invoked memories of the notoriousParsley Massacre of 1937, when Dominican President Trujillo ordered troops to kill thousands of Haitian migrants living along the border of the two countries.
The rekindling of old racial conflicts under the new DR deportation policy may be a populist attempt to stoke support during stagnant economic times in advance of 2016 presidential election in the DR. The Obama administration has reportedly leaned heavily on Medina’s government to ease the deportation order.”
Read More: http://dailysignal.com/2015/10/02/border-tensions-are-on-the-rise-between-haiti-and-the-dominican-republic/