Archive for the ‘aboriginal’ Category

Along with his pledge to sell off their rainforest home to agribusiness and mining, Bolsonaro has said openly “minorities will have to adapt … or simply disappear” 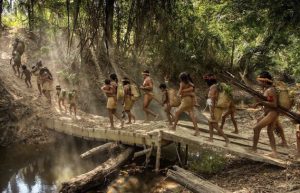 Brazil’s new president, Jair Bolsonaro, campaigned on a plan to sell off major portions of the Amazon rainforest to agribusiness, mining. and hydro-power.

“Minorities have to adapt to the majority, or simply disappear,” he said on the campaign trail, adding that under his administration, “not one square centimeter” of Brazil will be reserved for the country’s indigenous peoples.

Thirteen percent of the land in Brazil is protected indigenous territory in the Amazon rainforest, where most of the world’s last uncontacted tribes take refuge. Bolsonaro has said he wants to put all of that land on the auction block. 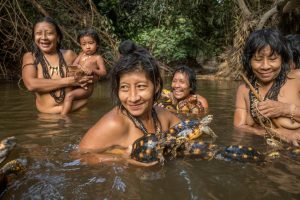 Contacted members of the Awá of Brazil, only 100 of whom remain uncontacted by civilization. Credit: Charlie Hamilton James, National Geographic

Since his election on October 28, he’s announced a merging of the ministries of agriculture and the environment — the latter of which was supposed regulate the former — into a new “super ministry” to oversee his plan.

The new ministry will be headed by politicians from the “beef caucus,” a group of lawmakers who have historically opposed indigenous land conservation, supported agricultural expansion, and attempted to relax slave labor laws.

Not only is this a grave attack on the human rights of Brazil’s indigenous people, but also on their ability to continue acting as the best defenders of the world’s forests,” writes Becca Warner, an environmentalism journalist for The Ecologist.

“We need all the forest we can get, to capture carbon from the atmosphere and keep it locked away,” she says. “In fact, scientists agree that halting deforestation is just as urgent as reducing emissions.”

Bolsonaro should have little trouble pushing his agenda through Congress, as it is currently dominated by a three-wing political alliance known as the Bancadas do Boi, do Bíblia e da Bala.

In English, those are the political representatives of “Beef” (ranching and agribusiness), the “Bible” (religious conservatives) and “Bullet” (the military).

Indigenous peoples and their supporters say the new push to open protected forested lands to agriculture and mining has clear genocidal implications.

More than 20 land rights activists have been killed in Brazil so far this year, with most deaths linked to conflicts over logging and agribusiness

Fifty land rights campaigners were killed in Brazil last year for trying to protect forests from illegal logging and the expansion of cattle ranches and soy plantations, according to Global Witness.

The men of the Fifth World (full documentary)

The Men of the Fifth World

NB Commentary:
All to often we forget about the vastness of this globe and its people who live in what we modernists call primitive. But in observing them, you find an ancient peace, a sacred wonder, an intense appreciation for the Earth.  Take a moment and view this video that shows us the almost extinct Ancient Aboriginals living in the land the white man calls Australia. Take a journey into the timelessness of  those who live in DreamTime. A must watch. 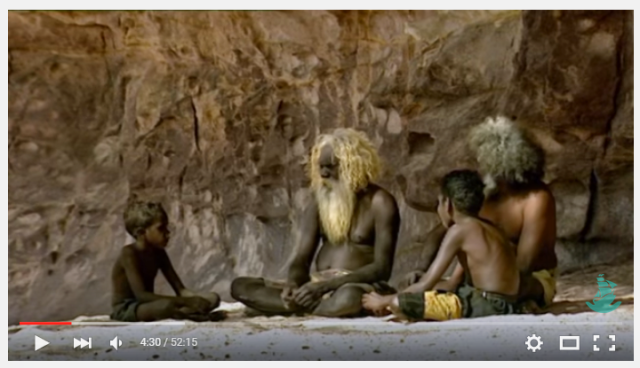 The men of the Fifth World (full documentary)
New Atlantis Full Documentaries
Published on Apr 19, 2013
The aboriginal culture of Australia, includes a large number of tribes inhabiting the oceanic continent before the arrival of the white man. But all that rich culture is doomed to survive in stocks in which its people are destined to extinction.
In this episode one of the elders that preserve aboriginal culture will show the most important elements of a culture that struggles not to disappear.
Know his rituals in which contacts the parallel world in which the gods, spirits and men live together. We will see the role exerted by the digeridu, a musical instrument employed in these rituals. We’ll see how it is manufactured by the musicians themselves, who will address the complex technique used to make it sound.
The cave paintings of Ubi Rock opened the door showing the spirituality of these villages that are sacred totems direct reference the natural world around them. Analyze the paintings today continue to make to represent their dreams and the importance of this painting.
Participate with them in making the famous boomerang and the banquet to which fishing leads a giant turtle. But the aboriginal community also show us the bitter side of life: the reserves in which its people seem destined to a slow extinction.