Archive for the ‘hijackers’ Category

Why the Towers Fell: The Greatest Conspiracy of All Time (Videos)

NB Commentary: In this video I want to share my thoughts on the subject of a UFO being sighted during the destruction of the Twin Towers. The video in question is called  “UFO Sighting at Twin Towers 9/11 WTCAttacks – FindingUFO” It was produced by NewsNeverSeenOnTV and uploaded by  a YouTube Channel called “FindingUFO”.

Quote:
“There were no places. Al the images of planes crashing into the towers were ONLY on media coverage. Again controlled. The actual buildings were destroyed by something else. Look for 9/11 ball on you tube. I believe the destruction of the towers was planned by a a group of human and extraterrestrial beings to bring around change that will pave the way for a bigger project.”﻿

If you think like a military strategist or even a chess player… I don’t play chess but I heard about it. You always have contingency plans in the works. First there is the hatching of the plan and along the way it is tweak but the original goal is set in motion long before the final “dustification” takes place.
Then there is the strategy of putting all elements in place on a need to know basis. The right hand does not always know what the left hand is doing. And then among the participants is a host of misinformation and disinformation to keep things interesting and keep them battling among themselves.
The other contingency is to have several options or ways to get to the goal, if it’s total dominion over the entire world, well, that’s a big plot and will have embedded in it many tiny plots.

Then there are the false flags leading up to the big bang.. or the perceived big bang because power never concedes until it consumes itself so as long as there are powerful people in powerful place in government, they will continue, in their think tanks to hatch more and more plans to gain more and more power, until the Think Tank explodes in on itself.

Unfortunately, since human nature has been hardwired to destroy itself, another crop of corruptibles will emerge and thus the cycle will continue. But I digress.
The game plan(s) are put in place. A serious of strategic moves are made, some in sequence some not, The idea is to keep the level of confusion controllable but not easily assessed or revealed. Next step is through a few conspiracy theorists, controlled opposition and at the bottom of the pile a few folks who are whacky enough to figure it all out and who will most likely to be called Chicken Little because the real plot is so preposterous it could never be believed to be a reality.
Once this is all set up, they still must maintain and control the narrative. And what is that, Order Out of Chaos.
In this modern age, they have technology that can create anything we “think” we see as have been proven over and over again. More than likely, the technology at the disposal of the masses is decades behind what the Military Industrial complex has, so, like pawns in this game of chess, the shadow government, hidden hand, nefarious overlords or whatever you wish to call them can manipulate what we see, hear and even think.
And then, the event happens. A series of events lead up to it, to test the masses.

It’s a grand experiment, and like strategic scientists they have to have the double bind. The real deal and the placebo. The effects of the placebo are more telling than the real thing. If people can be fooled by propaganda, disinformation and misinformation, than the real thing can easily be covered by many false flags instead of the real thing till the masses are so apprehensive, that when the “real thing” happens some believe it and others don’t. More than likely most will believe, and because they have been primed, they will follow the dictates of the so called “CareTaker Government” give up all their freedoms for protection, etc., etc., etc.

Now, we must remember that this plan has to take thousands upon thousands of years before it can be fully realized. Therefore, various nefarious backroom deals and secret societies must be implemented in order to keep the chaos going among the members as well as the leaking of the information from various sources to keep the masses confused and chaotic as well.

The Master of this Plot is a genius when it comes to understanding human nature and how it responds to certain situations. It knows that it can set things in motion, like a spinning top and it will spin endlessly on its own steam because it has been hardwired to do so.

Not one single solitary human is averse to falling into the trap of lusting for power, influence and impact on his world around him. The Masters know this. Why do they know this? Because they created us that way.
We are living in a human zoo, a prison planet with bars on our minds, bodies and spirits that we cannot see. This is the nature of the Grand Conspiracy. All the Chess pieces are in place and operable. Anyone who determines the grand scheme is ignored, demonized, compromised or discarded as they are inhibitors and a threat to the status quo. Even the corruptibles are disposable as they are still players/pawns as well. None of them, no matter how much they pledge allegiance, will get to be a Master. They are given empty titles of grandeur, wealth, status and are sometimes feared but they never, never will become a MASTER. That is not part of the plan. So leaders, political figures, religious Evangelists, corporate moguls, scientists, educators and even those who have been authorized to sit in the Think Tanks and strategize, all have to be approved by a higher Power, the MASTER, the OVERLORD of this reality.
Finally, if there is a finality to this agenda, there is a major catastrophe or reset and it starts all over again. This may sound pessimistic but it is the nature of this 3d reality Earth Prison Planet we live in. Understanding that we live on a Prison Planet is the first step towards awakening to what is happening around us.

9/11, What Was Mainstream Media’s Role? Ask A Psychic (Video)

NB Commentary: This is my attempt to bring some clarity to the controversy surrounding the 911 event which took place on Sept. 11, 2001. Here I consult the I Ching Oracle System to gain insight into the role the Mainstream Media played in shaping the narrative and impacting on the perception and reaction of those who viewed their productions. It has been 15 years since then and many different approaches have been taken to decipher what exactly happened on that fateful day. 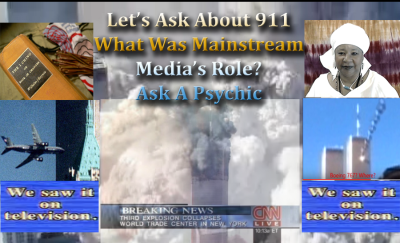 This video is a bit lengthy but I do hope you watch it to the end. It will help to advance your understanding of my style and technique when consulting the I Ching about such events.
I conduct ongoing workshops via the internet.  If you would like to learn how to use the I Ching Oracle System and learn more about the unique technique that I use please feel free to contact me…. nanabaakan@gmail.com.
Check out this playlist:
Nana Baakan Discusses Understanding the I Ching
https://www.youtube.com/watch?v=ELk_acmhi8I&list=PLC4D19CAA84861524
For more information on how to join our I Ching Workshops Online go to this link.
http://understanding-the-i-ching.blogspot.com/2016/08/sept-18-oct-23-2016-7th-series-of-i.html
More Reading:
THE COMPLETE 9/11 TIMELINE: INTRODUCTION, CREDITS AND LINKS
http://www.fromthewilderness.com/timeline/
http://cluesforum.info/viewtopic.php?p=2367625
http://www.911thology.com/nexus1.html
http://www.globalresearch.ca/911-truth-15-years-later-best-evidence-or-psy-op-on-wtc-controlled-demolition-claims/5545029
http://www.activistpost.com/2016/09/six-hard-facts-americans-forgot-911-reminded-every-year-never-forget.html