Archive for the ‘actors’ Category

What’s with This Hollyweird Bullshit?

What’s Up With this Hollyweird Bullshit?

NB Commentary: All too often we get things twisted. Actors are just that, actors. Their personal persona is NOT on stage, yet we identify with them as though their character on stage is who they really are rather than the mind control puppets that they truly are.

Hollywierd is just that weird, sick and painful for all. Why are we devastated when our favorite Entertainer dies or disappoints? Because we believe in the illusion they present on stage. We have no clue of who they really are or what their personal struggles.
Humanity engages in the cult of personality, and Hollywierd provides all the God’s. Humanity lives and dies thru the lives of their new found Gods whom they pay to entertain them and never renege on the agreement of keeping the illusion alive.
In ancient times, the enactment of the myths, legends and folklore was done by a select group of “actors” their mission was to inspire the community with the morals of the stories they told. Even Shakespeare had his role in this. In Ancient China this was done for the purpose of community and social cohesion. The Actors were highly revered, almost sacred in that they had the power to effect change in the minds, hearts and spirits of the masses. Same was true in Africa, particularly notable is the Griot, or Jali. Even in the Bible with Joseph being able to tell the King what his dreams meant and with great imagery he was able to avert certain natural calamities.
So, there certainly is a place for those who are enacting or acting out the stories, tales, myths and legends of a society.
Over time however, as with much of human cultural presentments, things became more and more corrupt, The performers began to realize how powerful they were and that they were able to effect those whom they performed in front of. You have to be a special kind of weird anyway to be able to enact various characters and scenarios and make it believable. You have to practically believe in the illusion that you are creating. You actually become a magician in whose hands the audience is swept away. You are able to move people to a gamut of emotions and actually change a person”s world view simply by you being “believable.” Now that’s power. All too often the actor may not be as privy to their power as the one behind the scenes and over time this one became the power behind the mask with the ability to keep or dismiss anyone at any time for any reason. Needless to say, this lead to competition, dishonesty and cruelty among all participants.
Modern performing arts, particularly in Hollyweird is overflowing with all types of debauchery, mind control, sex kittens and handlers. If you want to get anywhere you have to do the ritual and make the sacrifice. These people’s lives are so screwed up they are hardly examples for anyone to follow on the real. And nowadays they put their stuff on blast for the whole world to see.
They rise and fall like shooting “stars” and some are often killed if they don’t do the bidding of their handlers. If one of them falls we need only look at what they said or did or didn’t say or do to become a marked man. They are car crashed, airplane crashed, ruined, suicided or overdosed to death when their time is up. Everyone in Hollyweird knows this, and that is why there is such a silence around this matter.
Cosby is just the fall guy this time around, but the problem of sex abuse, pornography, pedophilia, alcohol and drug addiction is the seedy side of Hollyweird. That is just the way it is and commonly accepted. It is run by a Mob of unscrupulous people who care less about doing what is right and more about the power they can get by doing every immoral thing you can think of, which includes “worshiping Satan” and being part of some secret order or cult.
It is what it is, Cosby just finally had his come-upins. He pissed somebody off, or is a cover for even a much worse and bigger story.
There is always more to these Hollyweird tales. More that goes on behind the scenes. It’s part of the way things are done. People get it twisted thinking the “actor” is the part they play.
I have heard of actors being assaulted publicly because of a role they played on TV or in the movies. Obviously, they are acting and some do a good job of it.
Take Denzel for example. His roles varied, did that mean he was any or all of them in his personal life?
Again, do some research on what goes on after the show, look at what people are asked to participate in, what they are bribed into doing, how they are manipulated and how their families suffer. It’s called the cult of personality.
Humanity has given up its Ancient Gods for modern day celebrities. They keep them alive through offerings, praise and worship, they do not see them as humans but as demigods who give them an outlet for their desire to transfer power to someone outside of themselves. In doing so they can avoid being responsible for their own behavior.
These celebrities rise and fall and are as much a part of mind control as the masses who worship them. As a result the entire society is manipulated.
Celebrity magic where people take on the imaginary lives of people on the big screen and personalize them as if these folks were blood kin.
Hollywierd is a trap for all involved. The game is played, the whole world is literally a stage.

“So do you remember model Beverly Johnson claiming that she is one of Bill Cosby’s rape victims??? Now her talent manager, Don Gibble, is speaking out, and he says he remembers that single meeting Johnson had with Cosby…and she never said she was drugged or raped; instead, she said she had a nice brunch with both Cosby…and his wife. Gibble said, in part “It was odd to me that she changed her story. She said [she was] drugged and raped. I just remember that was not the conversation we had. And we had it repeatedly. It was brunch. It was just one time. It was a typical nice pleasant experience. It can be easily proven that Camille Cosby was at that brunch, so it was kind of dumb for her to lie.” Smh…. Read the rest here: http://newsone.com/3082011/beverly-johnson-bill-cosby-2/“ 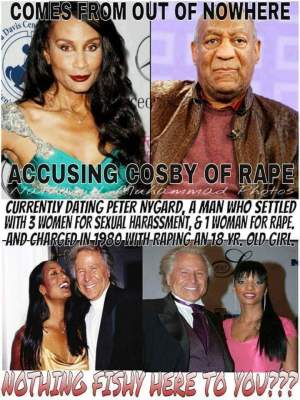 Not fishy at all. If you understand the victim mentality and/or the pathology of the abused. You would see how they replicate their history in subsequent relationships. In fact, I would not be surprised if some of Cosby’s accuser already had a history of some abuse. Mental, emotional or physical. People are missing the point. This is about a pathology and the culture of rape and abuse in our society. Bill is the fall guy but there are deeper issues and bigger fish to fry in the Hollyweird kitchen.﻿
These allegations have been going on for more than 20 years. Everyone in Hollyweird knew it, there was even a story that came out in 2014 in the New York Daily News about how, Frank Scotti, who worked for Cosby was given money to pay these women. He’s an old dude now and he came out. But I keep saying, this is a non-issue, everybody in Hollyweird does this, they fool around even though they are married, they have wild parties and do all kinds of debauchery, But in Bill’s Case he obviously pissed somebody off! Pure and simple, he said no to the wrong dude. 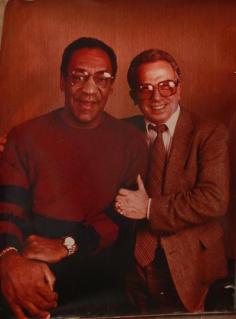 You have to understand the Hollyweird lifestyle to understand how this works. For all we know he could be an example to the others who may even THINK about saying “no”.
Remember this, entertainers are OWNED.  They are bought and sold on the stock market, they make money for their handlers, managers or whomever controls the money they get. I big slice of the pie goes to the banksters. We gotta come out of the clouds people. In the real world, Mr. Huxtable does not exist, Bill Cosby does. And if he don’t march on the line like he is told, he will go down, sooner or later.

Whether it was rape or not is a non issue to me. Cosby was/is a married man, so any fooling around on anyone’s part is a breach of contract. All parties need to own up to that. I agree they are giving him hell and there were claims to get money out of him, but in the final analysis is it appropriate for a married man to bring women to his hotel room while scanty clad and is it appropriate for the women to agree?
What’s up with this Hollyweird bullshit? Is any of their lewd behavior acceptable to the average married couple? I’m just saying. As a husband, father and so called role model, where was any of it okay?
It’s mind control, people, it’s Hollywierd!


December 18, 2006
Bill Cosby Under Fire  By Alex Tresniowski
The Comedian Settles a Case Accusing Him of Sexual Abuse—but Other Women Make Similar Claims. Pasted from <http://www.people.com/people/archive/article/0,,20059561,00.html>
Cosby Testifies About Secret Payments
Court: Comedian says he gave $100,000 to a woman who claims to be his daughter and her mother. July 16, 1997|JOHN J. GOLDMAN | TIMES STAFF WRITER
Pasted from <http://articles.latimes.com/1997/jul/16/news/mn-13121>
Cosby scandal exposes hypocrisy in more than one place
March 13, 2005|By Leonard Pitts Jr.
WASHINGTON – I like hypocrites. You would, too, if you had this job. A hypocrite is the next best thing to a day off. Some pious moralizer contradicts his words with his deeds and the column all but writes itself. It’s different with Bill Cosby.