Archive for the ‘manhood’ Category

Commentary: Is There A Hidden Psychosis Behind Police Brutality? 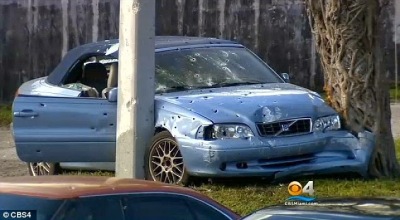 I always wondered about this connection between firearms and sex. Stay with me here. One day I had a dream as I was trying to figure out why rape and war go together. In this dream I was told that men shooting guns actually get sexually aroused and that once that happens they need to relieve themselves so they rape. It is also about power and control. If you look at the language used when describing sexual intercourse, you get words like “firing his shot”, “blasted” “busted” and various other metaphors for what it means when a man ejaculates. And then there are these synonyms: emission, ejection, discharge, release, expulsion.

I hadn’t thought about the sexual implications of war and police brutality in that way before. But It always appeared to me to have sexual overtones. When you watch how the police force suspects into handcuffs. Or how they “knock” you to the ground in a what appears to be sadomaschistic demonstration of dominance over someone they have rendered weak and helpless.

We keep looking at the sociopathic indicators that this type of behavior reveals, but I am wondering if we are missing an even deeper psychosis. Are we actually looking at folks who have sexual hangups, possibly sexual abuse and assault in their own history? Are we looking at a sexual perversion that can be shrouded in a uniform and a badge where a take down is imminent? Do these folks have a license to kill?? Or a license to rape, mentally, emotionally, physically and psychically?

I remember years ago noticing that weapons tend to resemble, in some way, the male phallic. From guns to to rockets to bombs they all look the same. The male phallic. Does this mean that there is an innate insecurity that men have about their manhood which is many instances is determined by their sexual prowess, however distorted this perception may be. What do bombs, guns etc. do? They penetrate, they explode, they ejaculate.

We have been living in an era of the Patriarchy for the past several thousand years. Male dominion over all life on Earth, particularly when looking at Male dominion in so many religions, politics, economics and social institutions around the world. It is expected that men should dominate! If a man does not carry that energy he is considered effeminate and a disgrace. Looking at our world we are seeing how this distortion has lead to more destruction and chaos since the days of the Gladiators.

The male principle in its desire to have dominion over all has become so distorted that the idea of freedom. peace, justice etc. is skewed and gleaned through the lens of destruction. Their creations have become destructive toys that hurt, maim and kill.

Frustrated, insecure and competitive men with killing toys are running our world and the consequences are devastating.

Excerpt: “In prison, infliction of mental and physical agony on helpless captives provides sexual pleasure to sick individuals. No penetration is needed, violent predators value power and control more. Sandra’s treatment, particularly isolation, are techniques found in CIA prisons and Guantanamo Bay. They are unbearable and leave no marks. The UN calls it torture.” Read More:

In my opinion, any editing of the information released to the authorities is suspect. In this video there is a shot you may want to check out. Sandra has a huge lump on her head that has been obviously photoshopped out. Here’s the link to that photo. http://www.conspiracyclub.co/wp-content/uploads/2015/08/ne55be5a07.jpg
Why did they do that? I am still suspicious and I don’t think the person in the video of Sandra in a orange jumpsuit is Sandra, maybe another person from another time, maybe it’s staged, with no timestamp and no identifying info on this video it could have come from anywhere.
Proof that Sandra Bland’s Mug Shot Was Edited & Why: http://www.conspiracyclub.co/2015/08/02/sandra-blands-mug-shot-edit/

From the Urban Dictionary:

Ejaculation
The one time a male says the words “I love you” and really means it.
While depositing an ejaculation into your partner the male screams with authority… “I love you!”
by Lummer HummerDecember 30, 2011

March 13, 2013 12:56 p.m. My Adventures With ‘Penis-Numbing’ Spray
In a bold step toward remedying the world’s least pressing health issue, the FDA recently approved an over-the-counter topical spray to treat premature ejaculation. (Similar products have long been available, but this is the first to win FDA approval.) Manufactured by Absorption Pharmaceuticals, Promescent’s active ingredient is lidocaine, a local anesthetic you have probably encountered at the dentist. Promescent’s website boasts that it “benefits both men and women by helping a man have staying power.”

Police abuse doesn’t get much more flagrant than this. Recently dozens of Miami-Dade police officers filled Adrian Montesano’s vehicle with 377 bullet holes, shot from every imaginable angle.
The frenzied show of police force was described by witnesses as “chaotic” and “contagious” in nature.

The vehicle’s 2 occupants had been trying to surrender, but 23 police officers in total decided to act as judge, jury and executions, shooting up the car, the suspects and also neighboring houses, businesses, vehicles. Even fellow police officers were hit by the insane barrage of bullets from the high capacity magazines carried in triplicate by each officer.
The events began back in the early morning hours of December 10th, 2013, but questions about the massive show of police force have begun to mount in the community.
Adrian Montesano had already crashed, and his vehicle remained pinned between a utility pole and a tree after an earlier police pursuit around 5:00 a.m.
Dozens of officers aimed their M4 assault rifles, as well as high capacity handguns towards the from every angle, and for several minutes, they shot round after round into the unarmed suspects.
Anthony Vandiver witnesses the assault from his house. He ran upstairs to watch the whole thing unfold, from a perfect, unobstructed view.“They said, ‘put your hands up!’  And the guys were still moving after they shot, like maybe 50-60 times,” Mr. Vandiver told CBS-4 Miami.  “And the guys tried to put their hands up, and as soon as they put their hands up, it erupted again.”
Read more: Counter Current News