Archive for the ‘Dr. Sebi’ Category

(Video) What Really Happened to Dr. Sebi – Why Didn’t His Family Tell Us He was Incarcerated

NB Commentary: By now folks all over the world have heard about Dr. Sebi making his transition to the astral plane. There has certainly been a lot of speculation around his transition. What I like to do, especially after viewing the articles, videos and comments on certain subjects; is to consult the I Ching Oracle to see if I can get a clear picture of what “really” took place.
Below you will find my comments, an article about his incarceration and subsequent transition and a video playlist that includes the video I uploaded with the readings I received.
Please feel free to leave your comments below. 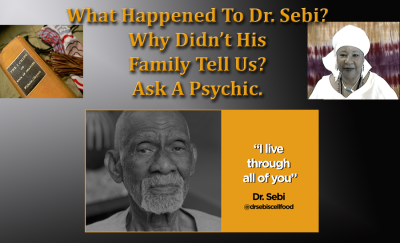 Here are some points that came to mind for me, before I consulted the oracles. These points seem to make sense as to why his family did not make an announcement about his arrest and subsequent incarceration. 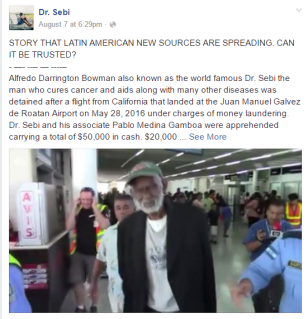 STORY THAT LATIN AMERICAN NEW SOURCES ARE SPREADING. CAN IT BE TRUSTED?

Alfredo Darrington Bowman also known as the world famous Dr. Sebi the man who cures cancer and aids along with many other diseases was detained after a flight from California that landed at the Juan Manuel Galvez de Roatan Airport on May 28, 2016 under charges of money laundering. Dr. Sebi and his associate Pablo Medina Gamboa were apprehended carrying a total of $50,000 in cash. $20,000 on Dr. Sebi and $30,000 on Gamboa. They were attempting to board a private plane headed to another location in Honduras. He was detained and then released for a pending court appearance that would later take place on June 3, 2016.

After his court hearing on June 3, 2016 Dr. Sebi was detained under the charges of money laundering by the Public Ministerio. On an unconfirmed date and time between June 3rd and the August 6th Dr. Sebi reported severe health conditions during incarceration related to pneumonia. In critical health condition he was rushed to the Vicente D’antoni Hospital but died in transit. Before this event his brother Garden Bowman reported that Dr. Sebi had experienced health complications from pneumonia and was prescribed medication by the hospital. His exact conditions of death and any evidence of foul play is still unknown and under investigation. He was received at the hospital by Dr. Edwin Interiano.

Dr. Sebi died at 82 and is survived by 17 children, he was a inspiration to many and will be intensely missed by people all over the world impacted by his holistic approach to wellness.