The Ravaging of Africa 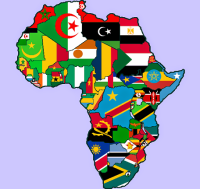 Notes: The ravaging of Africa has been enriching Europe and North America for more than 500 years. First, European empires imposed slavery and colonialism on the continent. After 1945, the United States took over as the dominant neo-colonial power.

Through the Pentagon and the CIA, the U.S. government has fueled 14 wars in Africa. The methods employed include direct and proxy invasions as well as arms transfers and military training. The U.S. has used the World Bank and the International Monetary Fund to systematically demolish African economies and health and education sectors. This military and economic war enables the looting of Africa’s resources by Western multinational corporations. Washington’s genocidal imperial strategy has killed more than 26 million Africans but failed to suppress popular resistance.

Twenty-eight activists from 16 African countries were interviewed for the series. The documentary is based on Asad’s award-winning article of the same title. For his publications visit? http://www.asadismi.ws
To respond email? aismi@can.rogers.com

1. “Militarizing Africa” describes how the United States has fomented the devastating war in the Democratic Republic of the Congo, as well as taken part in and engineered the Ethiopian invasion of Somalia. With Mfuni Kazadi, Millicent Okumu, Farah Maalim and Halima Abdi Arush.

3. “Corporate Plunder” details the disastrous effects of Royal Dutch Shell’s operations in Nigeria and those of Canada’s Tiomin Resources in Kenya. Also highlighted is the massive tax looting of Africa by Western corporations. With Ifieniya Lott, Mwana Siti B. Juma, Charles Abugre and John Christensen.

4. “African Resistance” celebrates the liberation of Southern Africa, the defeat of U.S. aims in the Congo and Somalia, as well as the diverse non-military struggles against U.S. domination that were represented at the World Social Forum. With Wahu Kaara, Amade Suca, Mfuni Kazadi, Farah Maalim, Virginia Magwaza-Setshedi, Emilie Atchaka and Njeru Munyi.

The series can also be downloaded at these two websites?
http://www.ncra.ca/exchange/dspProgramDetail.cfm?programID=57759

http://www.audioport.org/index.php?op=program-info&program_id=12787
[This website is for Pacifica affiliates in the U.S. only.]

Twenty-eight U.S. and Canadian radio stations in 25 cities from coast to coast in both countries have aired (h/a) or committed to air (c/a) “The Ravaging of Africa” (see list below). The U.S. stations are all part of the Pacifica Radio network except for KQRP and WRFU. The documentary has been downloaded 2, 586 times from the three websites listed above. CDs of the series have been distributed to 50 community radio stations in South Africa and been sent to Kenya, Sudan and Ghana. Internationally, the documentary is also being distributed through the key community radio websites of the World Association of Community Radio Broadcasters (with 3,000 members and associates in 110 countries), the Community Media Association in the United Kingdom, the National Campus/Community Radio Association in Canada, and Radio4All and Pacifica Radio, both in the U.S. Other important websites distributing the series are Pambazuka News, a leading African social justice newsletter, Black Agenda Report, Friends of the Congo (both U.S.), Africa Files and Rabble Radio (both Canada). The documentary is featured on 59 websites.

1. “A must-listen documentary, especially for those entities (both in and outside Africa) whose role it is to chart a sustainable course for the continent’s future. It’s also a powerful tool for those individuals and groups that are actively involved in challenging the Western bastardization of the African continent. This well-researched documentary provides credible evidence of how the Western European nations and the United States have for many years been devastating the African continent through the plundering of its precious resources, as well as by their continuing support for and instigations of military wars. The documentary successfully highlights some of the serious problems that nations in Africa continue to face as they struggle against the United States’ selfish determination to dominate their turf. This documentary cannot be ignored by anyone who cares about Africa’s economic, social, and political emancipation from the bondage of neo-colonialism.”
–Maria Mboono Nghidinwa, Ex-combatant of South West Africa People’s Organization (SWAPO), the former liberation movement of Namibia. Ph.D., Mass Communication and Media Studies, Howard University, Washington D.C.
[SWAPO is presently the ruling political party in Namibia].

2. “A great project. ‘The Ravaging of Africa’ can be of enormous educational importance in reinforcing African perceptions of the sources of their current predicaments, and in educating those searching for ways out of their present desperate straits. Warm thanks for your efforts.”
–Professor Dennis Brutus, Honorary Professor, Centre for Civil Society, University of Kwazulu-Natal Durban, South Africa.
Professor Emeritus, Department of Africana Studies, University of Pittsburgh (U.S.).

3. ” ‘The Ravaging of Africa’ must count as one of the very best set of podcasts available about the way in which Africa has been looted by multinational corporations and U.S. imperialism. The recordings of the voices of African militants were prepared during the Nairobi World Social Forum. What is remarkable is that there is a coherent political analysis that enables the listener to have a clear context for the perspectives provided by African activists. We can only hope that the producers will continue to publish further series of these outstanding podcasts. These are vital listening for all those committed to social justice in Africa.”
–Firoze Manji, Editor, Pambazuka News; Director, Fahamu – Networks for Social Justice. http://www.pambazuka.org
[Pambazuka News is a leading African electronic newsletter and website focused on social justice].

4. “An excellent series that really gets to the heart of the matter and lets you listen to those radical African voices you won’t hear anywhere else.”
–Roberto Nieto, Media activist and radio-host, CKUT Radio 90.3 fm at McGill University, Montreal.

5. “A fantastic series. We air tons of good programming, but ‘The Ravaging of Africa’ really stood out, because it tied together the various ways Africa is impacted by the imperial project, something you usually don’t get in a single program or news report. I really appreciated the rich production as well.”
–Leigh Robartes, News Director, KRFP / Radio Free Moscow 92.5 fm, Moscow, Idaho (U.S.) [Pacifica Radio Affiliate]

6. “Thanks for the excellent programming. So many Americans are unaware of how people live and struggle in other parts of the world. This program provides vital information about Africa and its people.”
–Cathy Murillo, News and Public Affairs Director, KCSB 91.9 FM at University of California-Santa Barbara, CA [Pacifica Radio Affiliate].

7. “A true work of broadcasting art! Thank you so much to the entire crew who worked on this special! The Ravaging of Africa was one of the most insightful and intriguing documentaries that the station has had the pleasure of playing. It not only received phone calls with reactions like, ‘I had no idea this was all going on! Thank you for making me aware!’ or ‘The program was so well done! Thank you for letting people know about what is going on in Africa!’ from listeners, it also garnered great praise from our programmers as well. Some of our programmers sit on either side of the fence politically but they all agreed that the program was very well produced and very informative and intelligent.”
–Jason Wellwood, Program Manager, CILU 102.7FM at Lakehead University, Thunder Bay, ON.

8. “‘The Ravaging of Africa’ is a compelling and timely new media presentation of the over 500 years of the West’s pillaging of Africa. The body of work is firmly ensconced in the tradition of Walter Rodney’s ‘How Europe Underdeveloped Africa’ and Patrick Bond’s ‘The Looting of Africa’. ‘The Ravaging of Africa’ deserves the widest possible distribution as it does a tremendous job of sharing with the public a critical prism through which Africa’s relations with the West ought to be viewed and analysed.”
–Maurice Carney, Executive Director, Friends of the Congo (U.S.), http://www.friendsofthecongo.org

9. “The unprecedented affluence we enjoy in the Global North is directly dependent on the violent plunder of resource-rich nations across the Global South — particularly the nations of Africa. ‘The Ravaging of Africa’ provides both the historical overview and the illuminating details we need to make sense of this crime-in-progress, and gives prominent place to the voices of front-line African activists leading the resistance.”
–Dave Oswald Mitchell, Editor of Briarpatch Magazine

10. “I just came across and listened to “The Ravaging of Africa” and wanted to thank you from the bottom of my heart. I can’t quite explain precisely how important your documentary has been to me as a person living in the African diaspora in the West and as someone who so often can’t find the words to express the frustration he feels at the forcible dispossession of the continent of his mother’s ancestors. But it’s been profoundly important, your documentary. So thank you.”
–Dave Hudson, Listener

The documentary was funded by

Imagine, how beautiful this world would be if this stopped????

OH, WHAT A TANGLED WEB WE WEAVE …