Is it just me?

How is it that having a European looking man, with blonde hair and blue eyes, from the middle east elevated to the status of God, is NOT promoting white supremacy?
For the next 30 days folks will be peppering their house, lawns, schools and churches and every where else with the image of a “white” child in a manger purported to be GOD incarnate. A so-called Christmas celebration that really is a cloak for white supremacy.

Ida B. Wells
Think about it, from now on it will be quite alright for Jesus to be depicted as White! All over the world from the deepest jungles to the highest skyscraper, Jesus will not represent every racial group or ethnicity, he, his parents and most of everyone around down to the angels will all be white. What a mind f***ck that must be for every body! They get to promote White Supremacy unabashed and take your money in the process. People keep saying folks are waking up, but this time of year makes me wonder on the real.
What do I suggest?
I suggest the truth, the real story…

No trees in houses;
No more tree farms for the purpose of chopping them down for folks to drag into their houses;
No more high electric bills from burning lights all day and night.
No more competitions about who’s house is burning the most Christmas lights in the most beautiful way;
No more suicides because of feeling unloved during these times;
No gifts given to folks when it ain’t their birthday;
No jacking up commercialism and credit card debt;
No more propaganda through movies; TV; radio; advertisements; etc. seducing people into buy, consume, buy, consume;
No false promises;
No so-called “Christmas Parties” where people only go to “see” what someone else is gonna give them;
No more pretending that “Jesus” was born on Dec. 25;
No more trashing the vibration of the Winter Solstice with greed and avarice.
No more soup kitchens once a year to feed the homeless; feed them all year;
No more Santa Claus lies; while chastising our children for lying;
No more thousands upon thousands if Not millions of turkeys; chickens; sheep; pigs and cows being slaughtered;
No more stuffing the gut with GMO laden food dishes; No more lies;
No more betrayals; these are some of the things I suggest.
If you really want to let the banksters know the real deal; don’t buy anything till January 30th that is Not necessary for sustenance. 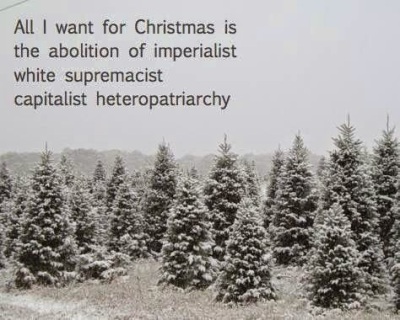 And finally; what would “Jesus” say if he came back and saw how much BS is going on in his name. Of course I confer that if he really exists than he sees it already. And judging with what they say about him; I am sure he is and would be appalled. And then they took his original image; if there ever really was one; and made him look like a European!! Come on; why did they do that? The original Jews did Not look like that.
But I digress.
Unless this “Jesus” is a megalomaniac; I would suggest; he is shaking his head pretty hard at this foolishness.
Megalomaniac:
“1. A psycho-pathological condition characterized by delusional fantasies of wealth; power; or omnipotence.

2. An obsession with grandiose or extravagant things or actions.