Manufactured Terrorism The Orlando Santa Monica Connection ! | We Are Change

NB Commentary: To date, I have read several articles and watch a plethora of YouTube videos on this subject and I have found this event to be very, very curious. There are so many distortions in the official story along with several distortions in the so-called alternative media and so called conspiracy theorists. But I must conclude 2 things.
1. These events have become text book occurrences with all the usual suspects
These events are having a counter effect, so instead of scaring folks to death it, they are actually making people roll over like a sleeping giant, and take a yawn.  Some folks are actually waking up and that’s a good thing.
Ironically, if too many dots are connected, the whole 911 charade and all that followed will come tumbling down and even the most ardent, patriotic supporters for the “official story” will begin to question the “official media narrative.” Folks won’t be so afraid to question or even be called a conspiracy theorist.
2. One thing that is certainly very apparent, the internet is turning over rocks in these events like never before. With everything being listed there is some form or another, with a little investigation and open source sharing, information gathering has become a lot less complicated and difficult. And on a good day, the information falls right into the investigative reporter’s lap. This makes the owners of these scripted events look highly suspicious. They are almost laughable because a Hollyweird script would be more imaginative than the same old drama these events create over and over again.
I strongly encourage folks to read this article in its entirety. It is very well written, very comprehensive along with revealing some deeply hidden characters and motives.
After the overwhelming avalanche of information flow around Prince Rogers Nelson and Muhammad Ali, I really wanted to steer clear of this most recent act of social engineering. But, I guess, I must be an investigative journalist in my own right, and so here I am sharing this story, that I again, encourage you all to read in its entirety.

I have already said my piece about US massacres in my other blog post. “Was Orlando Shooting a False Flag?” http://nanas-rants.blogspot.com/2016/06/was-orlando-shooting-false-flag.html

Sources within the Santa Monica police department claim that James Wesley Howell, an Indiana man who was caught with explosives and weapons on Sunday Morning, told the Santa Monica police that as many as five people were involved in planned attacks on gay communities in both Florida and California.
According to the LA Times, Santa Monica Police Chief Jacqueline Seabrooks initially said on Twitter that the 20-year-old Indiana man (James Howell) told one of her officers after he was arrested that he wanted “to harm the Gay Pride event.”
However, after the FBI quickly took over the case, a Santa Monica police spokesman Saul Rodriguez indicated that Seabrooks was mistaken and offered that the Santa Monica detectives who were working the case are “not aware of what the suspect’s intentions were at this point.”
You want proof? Call the Santa Monica PD, they released this story. SMH
Address: 333 Olympic Dr, Santa Monica, CA 90401 Phone:(310) 395-9931
Please share this vigorously and help me fight this false flag event.
THWARTED LOS ANGELES GAY PRIDE KILLER JAMES HOWELL SAYS HE WAS A CO-CIA OPERATIVE WITH OMAR MATEEN AND OTHERS TO ATTACK GAYS IN CALIFORNIA AND FLORIDA ! 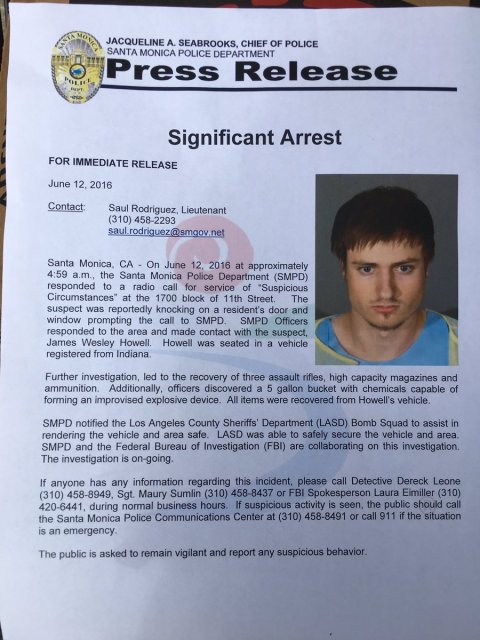 The official version of this story released by the LA Times falsely claims that on early Sunday, Santa Monica police received a call about a suspected prowler who was knocking on a resident’s door and window about 5 a.m. in the 1700 block of 11th Street, Santa Monica police said.
Patrol officers responded and encountered Howell, who was sitting in a car registered in Indiana, police said. Officers inspected the car and found three assault rifles, high-capacity ammunition and a 5-gallon bucket containing “chemicals capable of forming an improvised explosive device,” police said.
A law enforcement source who spoke on condition of anonymity said the contents of the bucket included Tannerite, an ingredient that could be used to create pipe bombs.
The source, who was not authorized to speak publicly about the ongoing investigation, said authorities also found camouflage clothing in the car.
Los Angeles County sheriff’s officials said the suspect told police he was going to the Pride parade to look for a friend. Authorities were looking for that individual.
Place jacwueline Seabrooks tweet here

Do police chiefs make these kind of errors everyday?
The real truth of the story was released to a former Los Angeles County prosecutor who works for Get Off the BS by two Santa Monica police officers that have been issued gag orders under threat of Federal prosecution for talking further talking about the incident.
According to two department sources, Howell called the Santa Monica police on Sunday morning claiming that he needed protection from the CIA. Howell further elaborated to the dispatcher stating that he “had been set up by the CIA – they are going to kill me.”
According to Howell, he was in LA to meet with another person in a collaborated attack on the gay communities in both Florida and Los Angeles.
Howell additionally stated that, “everything has gone south. Dan was gone when I got here. They killed the leader of the Florida attack this morning. They are going to kill me. I need protection.”
According to sources within the police department’s investigation Howell indicated to officers who first made contact with him that Howell claimed he was one of five people involved in a planned Sunday attack on both the east and west coasts.
Howell stated that he was suppose to “hook up” late Saturday night with his contact in LA who was suppose to have more weapons and chemicals to mix with the Tannerite he was in possession of.
“When I got here, Dan was gone. I went to his apartment and he had cleared out….I tried calling him but he never answered me,” said Howell.
When questioned about the other four people involved in the plot, Howell was only familiar with the first names of three of the alleged suspects, naming his contact in LA – Dan and two of the three contacts in Florida, Omarand Brandy
Speaking of the suspect killed in the Pulse Bar massacre in Florida, Howell stated, “Omar was not suppose to be killed. They lied to us – Omar and Brandy were suppose to get away.”
When Howell was questioned about how he and his conspirators knew each other, he said that,
“We were all familiar with each other through an online fundamental Islamic knowledge seminary course[1] – we were recruited through the course and trained together at a camp in Virginia – we were taught how to shoot and make bombs – everyone knew their part – something went wrong….”
Before the officers could further question Howell, agents working for the Los Angeles office of the FBI quickly swept in and took over the case. Santa Monica detectives were never allowed to talk with Howell.
In summary, it appears that Howell was on his way to “hook up” with another conspirator (Dan) to set off explosives and shoot people at the gay pride parade in Hollywood California on Sunday.
Finding his contact missing when he got to LA and having heard that Omar Matteen had been killed by a FBI SWAT teem in Orlando, Howell determined he had been double crossed by the CIA and feared for his own life
.
Howell was taken in to custody by the FBI before Santa Monica police officers could further question him about the motives behind killing gay people on both coasts of the US on Sunday.
However, in absence of further information and or anyone who will officially go on the record, there is no doubt that the America public is not being told the truth about the Orlando Florida shooting and the arrest of Howell on Sunday.
It is a shame that the Fed’s got to the Santa Monica police chief on Sunday before she was silenced, however we are very thankful that at least two officers have risked their jobs and freedom to reveal what she would of most likely Tweeted had the Fed’s not got to her.
Would you like to make odds that it was just a “coincidence” as the mainstream media reports, that Howell armed to the teeth with assault rifles and explosives, was on his way to a gay pride parade the same day as the massacre in Florida?
This Post made with Assistance of  Truthcatradio #truthcat #truthcats #truthcatradio
Follow CIA/NSA contractor and wistleblower Steven D Kelley
Shortly after the posting of this story, Main-Stream USA News shed light on the Online Islamic Fundamental course Howell spoke of.
Omar Mateen Did Not Act Alone!
Pasted from  http://wearechange.org/manufactured-terrorism-orlando-santa-monica-connection

BACKFIRE: Guns Fly Off Shelves After Orlando Shooting Amid Calls for Gun Control
http://wearechange.org/ar-15s-fly-off-shelves-orlando-shooting/
Governments are the world’s biggest mass murderers by millions. Including China, Russia, Chile, Germany, Cuba, Ukraine, and yes, the U.S. — http://wearechange.org/study-u-s-regime-has-killed-20-30-million-since-world-two/
It’s just odd that he happened to be a mouthpiece for big oil in a documentary during the disaster here…and I say here because I’m in the Gulf and I know the truth about what happened here.
http://wearechange.org/orlando-shoot-dad-longtime-cia-asset/

Was Orlando Shooting A False Flag?