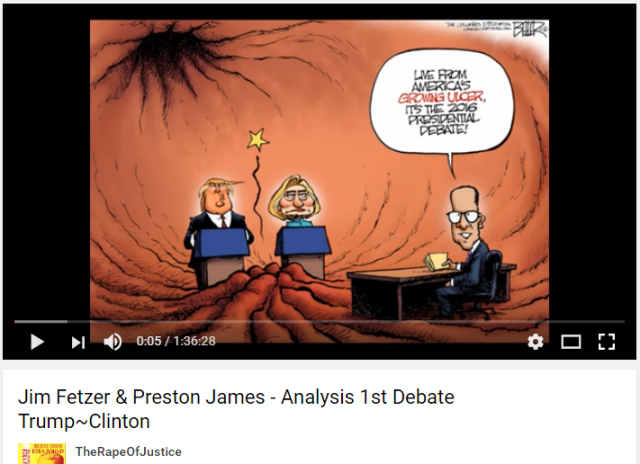 Jim Fetzer & Preston James – Analysis 1st Debate Trump~Clinton
https://www.youtube.com/watch?v=kaUkz-YkJRs
I don’t typically make video commentaries on videos on YouTube, but I felt compelled to make one for this video. I left my commentary under the video as well but I wanted to bring some things forward, as it were, especially since this has become a hot button issue over the past few days since the debate.  The amount of diatribe over the debate has become nauseating as far as I am concerned, because it seems people are seriously missing the point.  So this is directed to Jeff Rense and to Jim Fetzer and the other guests that were on this show, highlighted above. I am going to submit a video I Ching Reading on this Trump Person but I wanted to present this first. 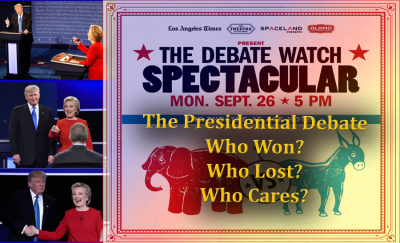 What I don’t get is that you guys don’t see that the “selected” President has to do whatever they are told to do, they are puppets of the shadow government who works behind the scenes. All to often these candidates say they are about A,B,C but once in office they changed their tune and mouth the party line. Why don’t you guys see the facade this whole thing is?
We got all this “Hope and Change” with Obama, and what did he do? Folks were out in droves to listen to him make promises. What does it mean that polls say this and crowds say that, when in the final analysis, if they want Killery to win she will. It’s all orchestrated and controlled, and I think you guys would do better reporting on the deep state rather than the facade of a debate. Let me add this, one of your callers said that he doesn’t think that was Hillary, and I must agree.
First, if they have that kind of technology to make her over, than they surely are cheating the American people and the world to be able to bring on such a recovery for a clearly very sick woman. the game is on, to make you think that that Woman is Hillary. They have prepared her so well, she gave the hint when she said, “I am prepared to be President.” I believe they will roll in a body double to take her place as Hillary.
That woman did not have her spark, her voice and her body language, all of it was rehearsed and prepared so she could play and look the part. Second, unless they have had her double out all the other times she has been in the public eye, botox takes a bit of time to heal. And again, if they have that kind of technology to make a person look 20 years younger overnight, well, Trump should buy some stocks in that company or buy the company, because that is a little bit of a stretch for me. My neck is naturally youthful, Hillary’s neck goes from youthful to old again within several “sightings.'”

“Botox results will not appear instantly. It takes 5 to 7 days before the effects of Botox start to work and for you to start to see a reduction in the lines and wrinkles on the face. It takes 2 weeks to see the full expression of the treatment with Botox that you get.” https://youtu.be/ST5NRZWzmAE

You’ve seen movies where they completely change the way a person looks. I am sure that her handlers are watching what we are watching and noticing what we are noticing, so a little mole on her lip can be put there with an eyeliner pencil. They are full steam ahead in creating this “carbon copy.”
Maybe it’s because you guys are guys that the little subtleties get missed, but the Clinton Foundation, the emails, Benghazi and Arkcancide and stealing the nomination from Bernie can be observed by any gender!!
Anyways, I really think you guys are putting too much energy into this. You, like the many African Americans who thought “Obama” was gonna be different, are going to be just as disappointed when you find out that Trump can only “do” what he is told to do.
Links Of Interest
“Finally, this isn’t about Trump vs Clinton, that is merely the illusion we are being invited into believing. This is about awakening to the fact that our system is absurd and it’s time to do something different. What is the answer? That is what we must discuss instead of playing this broken political game of dividing and choosing which goon to “vote” for.”
http://www.collective-evolution.com/2016/10/03/email-claims-hillary-clinton-considered-having-a-drone-attack-carried-out-on-julian-assange/
Jim Fetzer & Preston James – Analysis 1st Debate Trump~Clinton
https://www.youtube.com/watch?v=kaUkz-YkJRs
Clinton showed she’s as un-serious on foreign policy as Trump
Danielle Pletka is senior vice president for foreign and defense policy studies at the American Enterprise Institute.
http://www.politico.com/magazine/story/2016/09/2016-first-presidential-debate-what-we-just-saw-214294
Donald Trump ‘manterrupted’ Hillary Clinton over 50 times during the debate
http://www.dailydot.com/irl/hillary-clinton-donald-trump-interruptions-presidential-debate/
How Long Does It Take For Botox Cosmetic To Take Effect? | Dr. Vitenas
https://www.youtube.com/watch?v=ST5NRZWzmAE
Who Won the Debate? Vote in our Straw Poll!
http://www.270towin.com/news/2016/09/26/who-won-the-debate-vote-in-our-straw-poll_381.html#.V_K9u-9rhpg
How Donald Trump Won the Debate
http://www.breitbart.com/big-government/2016/09/28/how-donald-trump-won-the-debate/
10 Thoughts About The Debate
http://www.huffingtonpost.com/bob-burnett/ten-thoughts-about-the-de_b_12214174.html
﻿ Hillary Clinton Prepared for the Debate, and Showed She Is Prepared for the Presidency
https://www.thenation.com/article/hillary-clinton-prepared-for-the-debate-and-showed-she-is-prepared-for-the-presidency/
Polls, Polls, Polls – OK, Who Won the Debate?…
https://theconservativetreehouse.com/2016/09/26/polls-polls-polls-ok-who-won-the-debate/
At the Debate, Each Was Clueless on America’s Place in the World
http://billmoyers.com/story/last-nights-debate-clueless-americas-place-world/
The (Real) Polls Prove It: Clinton Trounced Trump in the Debate
http://www.rollingstone.com/politics/features/the-polls-prove-it-clinton-trounced-trump-in-the-debate-w442533
Donald Trump: The one time Hillary Clinton got under my skin during the debate
Pasted from <http://www.cnbc.com/2016/09/27/donald-trump-the-one-time-hillary-clinton-got-under-my-skin-during-the-debate.html>
Clinton clearly went into this debate not looking for one or two big “Have you no decency” moments but rather looking to hit him with a rat-tat-tat series of taunts and jabs to see if she could get him to lose his cool and throw him off his game. It ended up happening a lot more quickly than I expected. No more than fifteen minutes in he was getting visibly angry. And he stayed that way for the next hour plus.
http://themoderatevoice.com/marshall-on-the-debate/
Now, we’re learning that NBC’s parent company Comcast donated $5.6 million to the Democrat Party during the convention in Philadelphia.
http://www.thepoliticalinsider.com/leaked-now-learn-lester-holt-became-moderator-debate-horrible/
HILLARY BUSTED! NBC DRESSED INTERN AS FEDEX DRIVER TO DELIVER CLINTON DEBATE QUESTIONS A WEEK EARLY
https://www.youtube.com/watch?v=tioeZRt8GmM&t=0s
Lester Holt wore an earpiece during Presidential debate
https://www.youtube.com/watch?v=H17Yl8uHVFw&t=0s
Proof Hillary Clinton’s Corrupt, crookedness @ debate stage, worse than “Watergate” Podium Gate
https://www.youtube.com/watch?v=RIYdjq2Wa6E&t=0s
7 SCARY REALITIES FOR AMERICANS WITH DONALD TRUMP AS PRESIDENT
http://www.documentarytube.com/articles/7-scary-realities-for-americans-with-donald-trump-as-president

The American Voter Is An Enabler, Part 2 (Videos)