Manhunt for Steve Stephens Ends In His Suicide In Erie, PA (Videos)

Okay folks, I have been dealing with my own distraction in trying to make some sense out of why Trump would bomb Syria and wag the dog at North Korea. And then, right on Easter Sunday, while everyone is praising the Lord for rising from the dead, which I always ask, where did he go, this guy decides to kill a few people. But we only have a real account of one person so where are the other 13 bodies? Hmmmm, interesting number there, #13.

Then it’s the whole thing about the manhunt.
Of course they knew where he was, how in the world of mass surveillance can they not find this guy? They know where me and you are, right? 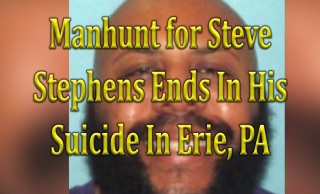 So now dude is dead. Kilt himself. Now why did he go and do that? Gambling problem lead him to a suicide mission of killing some old man walking down the street collecting tin cans? Hmmm.

Now, I have been asked to do a reading on it, and I may or may not, cause this so-called “Threat of Nuclear War” looming over us and no place for my grandchildren to hide in the bunkers with the fat cats, I ain’t too sure if I will get to  it, and besides by the time I do, we will be looking at some other crazy shit happening in this world.
But after watching the video of him talking about what he has done, he sure was pretty calm. I mean, he said he killed 13 people and was about to kill some more?
Questions:
Where are the bodies of the other 13 people?
Where are the families? Well we do have the Godwin family but how about the other 12?
Why was that dude so calm? He looked rather self contained to have just murdered 13 people. In fact he didn’t even look like he “snapped” at all but more like he was reading a script.
Built in anger? Then how did he cover that up for 37 years?
If I am not mistaken, wasn’t there another manhunt in Erie or there abouts when that dude went ballistic and killed a State Policeman while back?
What’s with the woods of that part of the world?
But back to the video, he is driving and on the phone and recording himself and telling whomever he is talking to that he loves them and by the way, here’s my facebook profile name. Huh?

Then he goes back to recording and tells everyone who watches the video his telephone number? He wanted people to call him while he was killing more people? Now that don’t make sense.

Why would you call him? Did the police do their job and call him? Why would he, a serial killer, give out his phone number?
If he wanted to be tracked down, well, don’t he know there are many, many ways these folks can track you, dang, they probably got a tracker in that car. Which I don’t know how he could drive like that, talk on the phone and record. And did anyone notice he did not have on a seat belt?? Straight up violation. He should have been pulled over just for that.
I checked out a few articles, some saying this others saying that, but for sure, when it gets blasted all over the news, there is an ulterior motive. One we can ascertain and one we may never figure out.
With Trump being against a gun ban, and Obama trying with all his tears to get

one, I wonder if these killings are going to start that up again. The war against guns, meanwhile, folks is bombing up folks all over the place and buying guns like gangbusters on the black market, but I digress. But I do want to mention the guns and ammunition sales that were transacted between the US and the Rebels, but yeah, they don’t like their government and so they got good reason for the US to support them with guns, ammunition and a little gas from time to time.  Seems like they should do the same for the anarchist and patriots here in the US who feel the same way, instead of taking their guns away from them, but boy was that a digression.

And did anyone notice the whole “monster” label?
And did anyone think just for a moment, that here we have more fodder to label Black Men as dangerous monsters? Like that Blakc man who went ballistic and went all the way to the school and killed his wife in front of her students?
Hmmm, nice narrative for all the Trump Supporters who just happened to get galvanized by his racist vitriol.
The plot thickens and folks really need to see how manipulated they are being.
Of course they know where he is, how in the world of mass surveillance can they not find this guy? They know where me and you are, right?
Since folks want to say false flag hoax, etc. They will let it go and end dramatically with bombing the shit out of that guy, or in his case, this lone shooter just kills himself, and that’s the end. No one will ever know what the hell happened and his girlfriend ain’t talking.
I believe it’s a distraction/false flag diversion, it doesn’t mean no one is hurt or killed, but it does serve a purpose.

The Hypocrisy of Trump’s Attack On Syria (Videos)