Las Vegas: Who Died and Got Hurt and Who Didn’t? (Videos)

“Las Vegas: Who Died and Got Hurt and Who Didn’t?”
So I search for my comment under this video:
How Billions were * FOOLED * by the Vegas shooting (Part 2) because I like to share the video I am commenting on, just like I do with articles, etc. But when I found my comment, and clicked on the link, well it seems, this channel has been terminated.
So I searched the title of the video and found the video, but I downloaded it just in case it disappears again.
How Billions were * FOOLED * by the Vegas Shooting (Part 2)
https://www.youtube.com/watch?v=dRO7UAckaDc
The owner of this YouTube Channel started another one that is now called Nevada Forensics.
So let me move on to my comment. 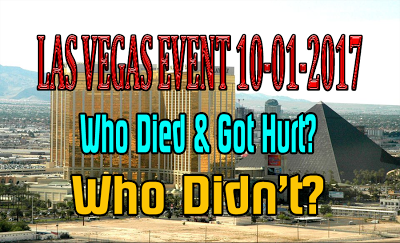