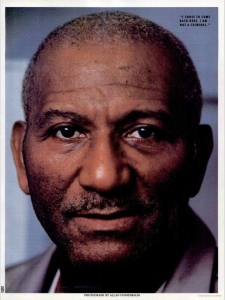 His name was Herman Ferguson, and if you’re not dialed into the Black Nationalist Movement, the name may not ring a bell of recognition.

But to those aware of the Black Power Movement of the 1950s, ‘60s, and ‘70s, Herman Ferguson’s life, role and commitment rings like a bell in the night.

For Ferguson, often accompanied by his wife and comrade, Iyaluua Nehanda, joined Black groups an a New Afrikan Nation ( Provisional Government Republic of New Afrika ) that supported the fight for freedom. He joined several, but perhaps few had more historical significance than his joining of both the groups formed by Malcolm X after his painful break from the Nation of Islam; the Organization of African American Unity (OAAU) and Muslim Mosque, Inc. (MMI).

He met Malcolm in the late ‘50s, when he was still in the Nation, and became a staunch supporter thereafter.

In 1967, he and fellow members of the Jamaica Rifle and Pistol Club (in queens, NY), were arrested and charged with the planned assassination of two prominent civil rights leaders. After a conviction a year later, Ferguson fled the U.S., and he and his wife (3 years later) began a life in Guyana, working in the field of education.

They stayed there for 19 years, and lived good lives there. Ferguson could’ve retired with a government pension under his assumed name, “Paul Adams”, for he spent many years as an officer of the Guyanese Defense Force.

But the call of home only got louder with time.

Ferguson said he missed his “family”, his “childhood friends”, and “the Movement.”

His wife, Iyaluua, said, “I don’t think people really understand the nature of exile.” She explained, “Exile is death.”

So, Herman Ferguson and his wife returned to the U.S., where he knew a jail cell awaited him, but he did so, in part, because the weather had changed, in that the release of top-secret COINTEL-PRO files revealed FBI skullduggery against Black and anti-war activists. Also, several prominent Black Panther figures (like the late BPP Minister of information, Eldridge Cleaver), and Weatherman (a white, anti-imperialist group) had returned to the States.

He did 3 years, got out and hit the ground running, working on behalf of other imprisoned revolutionaries, by organizing, speaking out and building support for such efforts. He and his wife gave deep and broad support for the Malcolm X Grassroots Movement, headquartered in NY.

For over 50 years he fought for the same ideas and principles that Malcolm supported: Black Nationalism, popular self-defense, and Black self-determination.

Now, after 93 years of life, Baba Herman Ferguson has returned to the Ancestors.

Herman was a long distance runner in the battle for national liberation. He served as a judge and District Representative of the Republic of New Afrika, was a member and Chairman of the Education Committee of brother Malcolm X’s Organization of Afro-American Unity (OAAU), and was present on that fateful February 21, 1965 day at the Audubon Ballroom when Malcolm was assassinated. He vowed to carry on Malcolm’s teachings as best he could, organizing the Black Brotherhood Improvement Association in Jamaica, Queens, holding street corner rallies, political education classes, martial arts classes and forming the Jamaica Rifle and Pistol Club, Inc.—all of which made him a target of the u.s. government’s Counterintelligence Program (Cointelpro).

In 1967, Herman chose exile rather than go to prison on the false charges he was convicted of. He, along with his life partner Iyaluua Ferguson, spent nineteen years in Guyana, South America, where he participated in Guyana’s nation-building, rising to the rank of Assistant Director General in it National Service, joined the Guyana Defense Force (GDF), and retired with the rank of Lt. Colonel.

In 1989, Herman voluntarily returned to the united states and was immediately sent to prison. Upon his release, he immediately stepped back into work in the nationalist community, co-founding the Malcolm X Commemoration Committee (now Chairman Emeritus), the National Jericho Movement for Amnesty & Recognition of u.s. held P/POWs, publishing NATION TIME, serving as Administrator of the New Afrikan Liberation Front and co-chairing the Queens chapter of NCOBRA (National Coalition of Blacks for Reparations in America).

The case for Russia collusion … against the Democrats