WHY THIS AND WHY NOW?

Hollywood Offenders Are Being Outed

Come on people, look at this with clear vision. Okay, I ain’t saying that I have the clearest vision in the world, but why this and why now?

Anyone who is bringing out information against anyone, and I do mean anyone, who has been performing pedophilia acts, raping women or abusing and killing children has been known for doing so for as long as they have been doing it. But nobody said anything all this time.

So my question remains, why now? 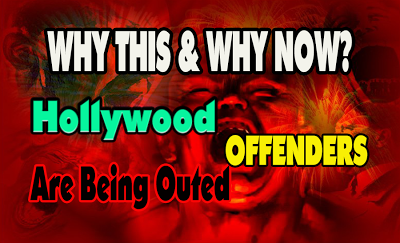 If anyone is coming forward they are certainly being supported and protected because they are exposing the big dogs, correct? Well, not really, cause Jeffrey Epstein only went to jail for a few months. Jeffrey was the ringleader conspirator for harboring young girls and carrying airplane loads of folks to his little island, how come them folks aren’t being outed? Has anyone seen that flight log?

Where are the people they have abused?

And Cosby, he goes out like a light… but back then we had tons and tons of folks defending Cosby. How come ain’t nobody defending these other folks? Why is this being allowed to happen?

Does the FBI need to finally do its job to gain the confidence of the American people after it has done a miserable job on the Las Vegas Event? Do they think that if they start “acting” like they know who these guys are and bring them to justice that, like a flip of a coin, they can augment and repair the serious damage they have done over the years and not just with Las Vegas.

Do they think that if they throw this bone at us, we will all shut up and go away?

Press For Truth is too optimistic, in my opinion. These folks are small fry, and they will throw these small folks into the fire to say the bigger dogs, who will remain unnamed, un-indicted, un-prosecuted and inconspicuous. As they remain so, they will just light the fire under other small fry, get them involved in these nefarious activities and when the time comes, burn them at the stake. They will be and have always been protected.

We can go after these pedophiles and rapists but first we must guard ourselves from these people. We must teach our children what is safe touch and what is not. We must teach them what really happens in Hollyweird and strongly encourage them to think twice before they go off to lala land. We must teach them the dangers of this behavior in closer proximity, like the home, the church, the mosque, the synagogue, the neighborhood school yard and classroom.

We must love our children enough to give them the real information they need so that they do not become cannon fodder for this perpetrators who care not about collateral damage. We must be with them as much as we possibly can, so we can watch over them. And those of us who have a problem and don’t know how to stay within boundaries in dealing with our children and the children of others, we need to go get help for our problem.

Destroying the youth of a generation, destroys the future of that generation and their progeny as well. The replication of these acts against our young people is heinous and horrific, but if we just spend time pointing fingers at the perpetrators and not look at what we are doing to create an environment where these perps can flourish we are missing a golden opportunity to change things.

Hanging one perp at a time, killing them off, banishing them, divesting them of their wealth, shaming them, etc., etc., etc. has some impact, but we really need to take it to the heart, and change how we view this world, what we allow our children and young people to do and be around, and become more responsible for their lives. It will take more than just some quality time, while driving our children to school or standing on the corner waiting for the school bus.. It will take more quality time then sitting on the bleachers at the game or in the audience at a recital.

It will take talking to them, one on one, spending weekends with them in the park, with no media, and explaining to them, having a conversation with them, about the hard cold facts of life.

We can no longer live in a bubble of fabricated trust that our teachers, preachers, politicians and entertainers, et al, are that concerned about our child’s mental and physical health, that they will guard themselves, restrain themselves and prevent themselves from harming our children. Obviously, with all that has come out, this is not the case.

All in all, i want to see the big smack down, only then will I be sure that things are really changing. Small fry roasts only serve to distract us from the real deal, and that’s the global network of child trafficking, abuse and sexual predation. When they connect the dots, and the big heads roll, then I will feel that a paradigm shift has really taken place and not just window dressing.

A former employee of George Soros has just been accused of brutally sexually assaulting three women, two of whom are former Playboy bunnies. Howard ‘Howie’ Rubin allegedly lured the woman into a Manhattan penthouse equipped with a sex dungeon as he tortured them with cow prods and raped them. In this video Dan Dicks of Press For Truth lays out the latest details in this horrific story as well as other cases now popping up in the wake of the Harvey Weinstein scandal.